In Central Asia, a crisis is brewing over water and electricity. The old Soviet system of resource sharing between countries of the region has collapsed. As a result, some countries experience regular blackouts, and others have to deal without water for irrigation. 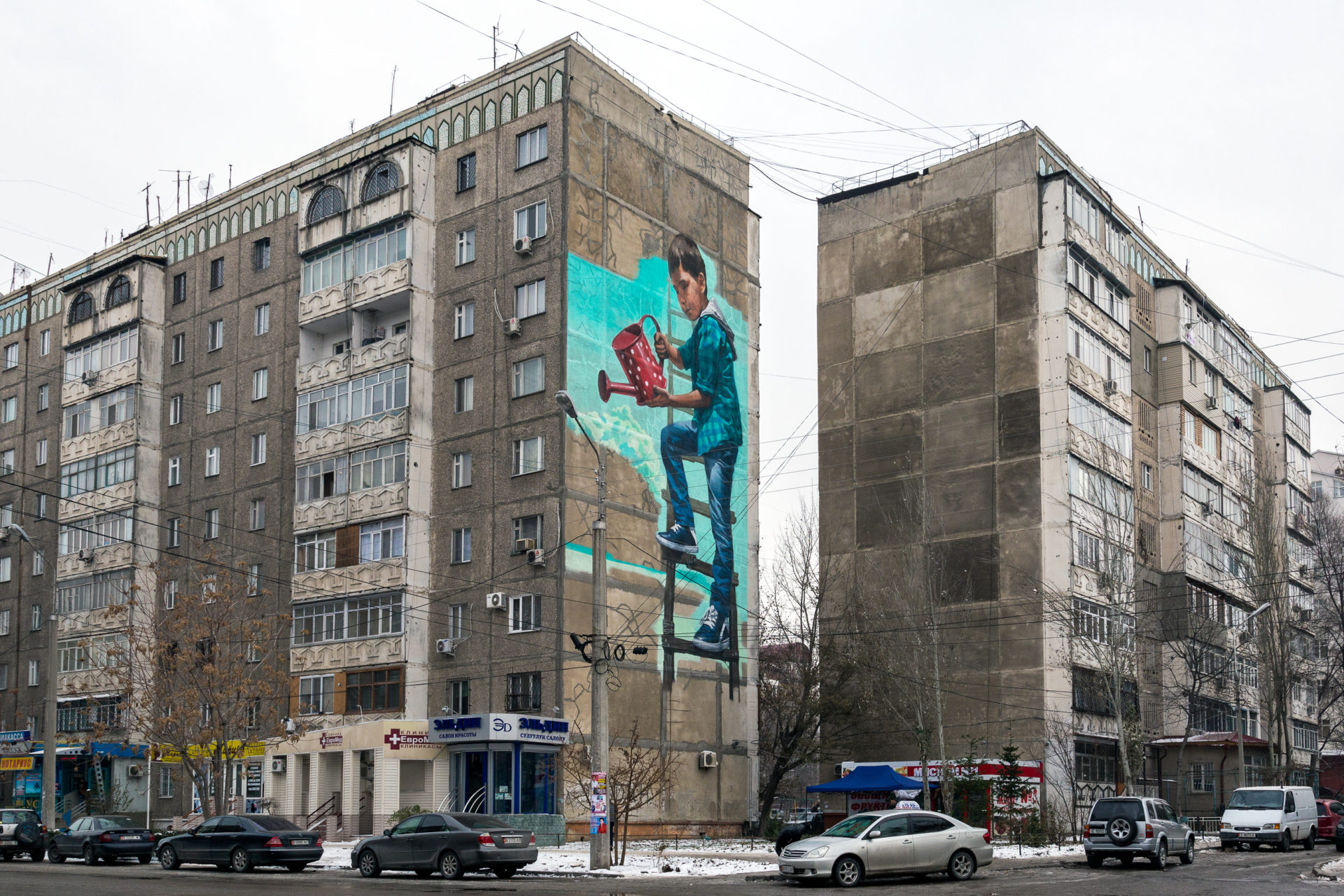 Water has always been important in Central Asia. The region has some of the highest degree of “continentality” in the world. This does not only lead to very large intra-annual temperature variations, but at the same time naturally limits the region’s water resources. Because of high temperatures and low levels of humidity, evaporation rates are high in the region. Hence, large parts of Central Asia have a desert and/or semi-arid climate. 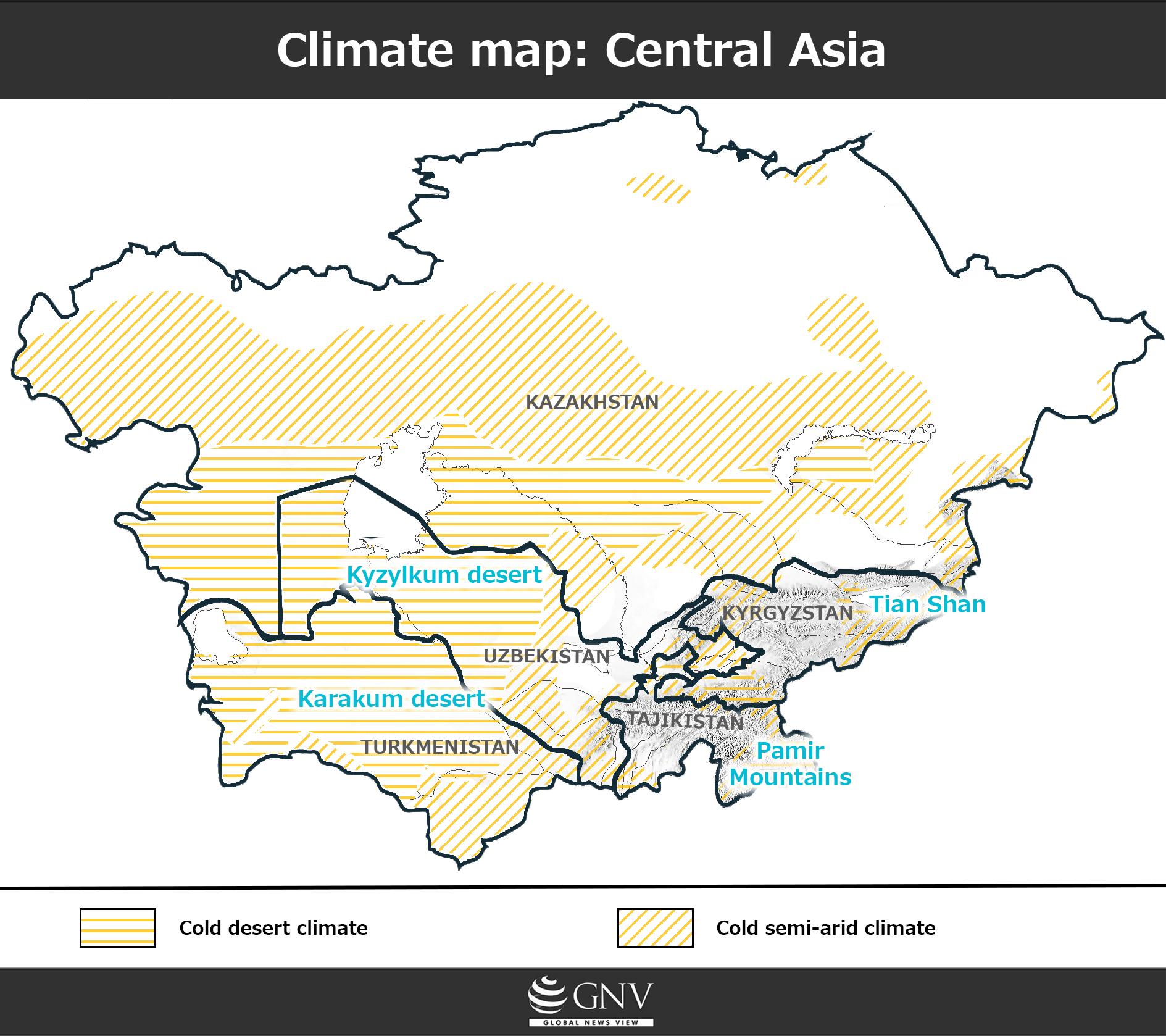 In addition, Central Asia is considered a “hot spot“ for climate change, which is expected to have serious consequences for the region’s water supply.Water that feeds large parts of the region, mostly originate in headwater areas in high-mountainous zones. These include the Pamir and Tien Shan mountain ranges.

In these mountainous regions, both glaciers and snow packs provides water storage, and seasonal melt water. Both glaciers and snow packs release water during the summer when it is imperative for agricultural irrigation. However, global warming shortens the period during which temperatures are suitable for snow packs and glacial formation. At the same time, it extends the melting period. Another reason for the rising value of water in the region is economic development, and the rapid growth of Central Asia’s population. Large water withdrawals from the Amu Darya and Syr Darya Rivers used for irrigation, have led to the progressive desiccation of the Aral Sea since the 1960s. Traditionally these rivers have supplied the Aral Sea with water. 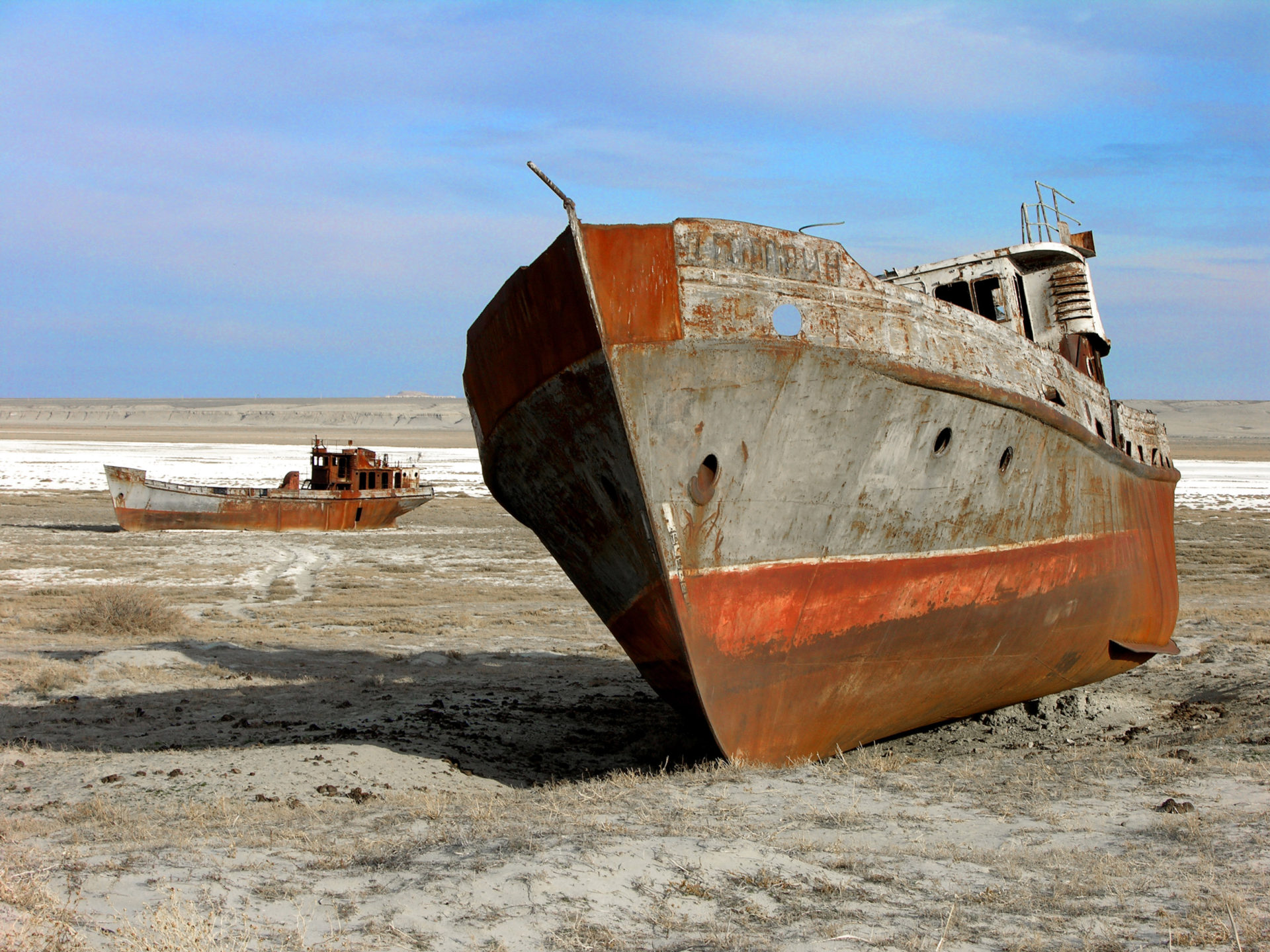 Currently, water has become one of the reasons for rising tensions between several countries in Central Asia. The collapse of the Soviet Union has complicated water management, and has become a reason for disputes, especially between Tajikistan, Kyrgyzstan and Uzbekistan.

Tajikistan and Kyrgyzstan are mountainous water-rich countries with low amounts of additional natural resources. The Amu Darya and Syr Darya rivers get most of their water supply from areas within these countries. Uzbekistan on the other hand, is an agricultural producer rich in oil and natural gas. For example, Uzbekistan is the sixth largest producer of cotton in the world.

During the Soviet period, these countries collaborated on water management under one system. Moreover, there was a division of economic roles between them. In winter, upstream countries gathered water in large-scale reservoirs and opened them in spring and summer for irrigation purposes. Dams also operated as hydroelectric power plants. During winter, when there is less water in the rivers for the purpose of power generation, Uzbekistan provided Tajikistan and Kyrgyzstan with fossil-fuel generated electricity. 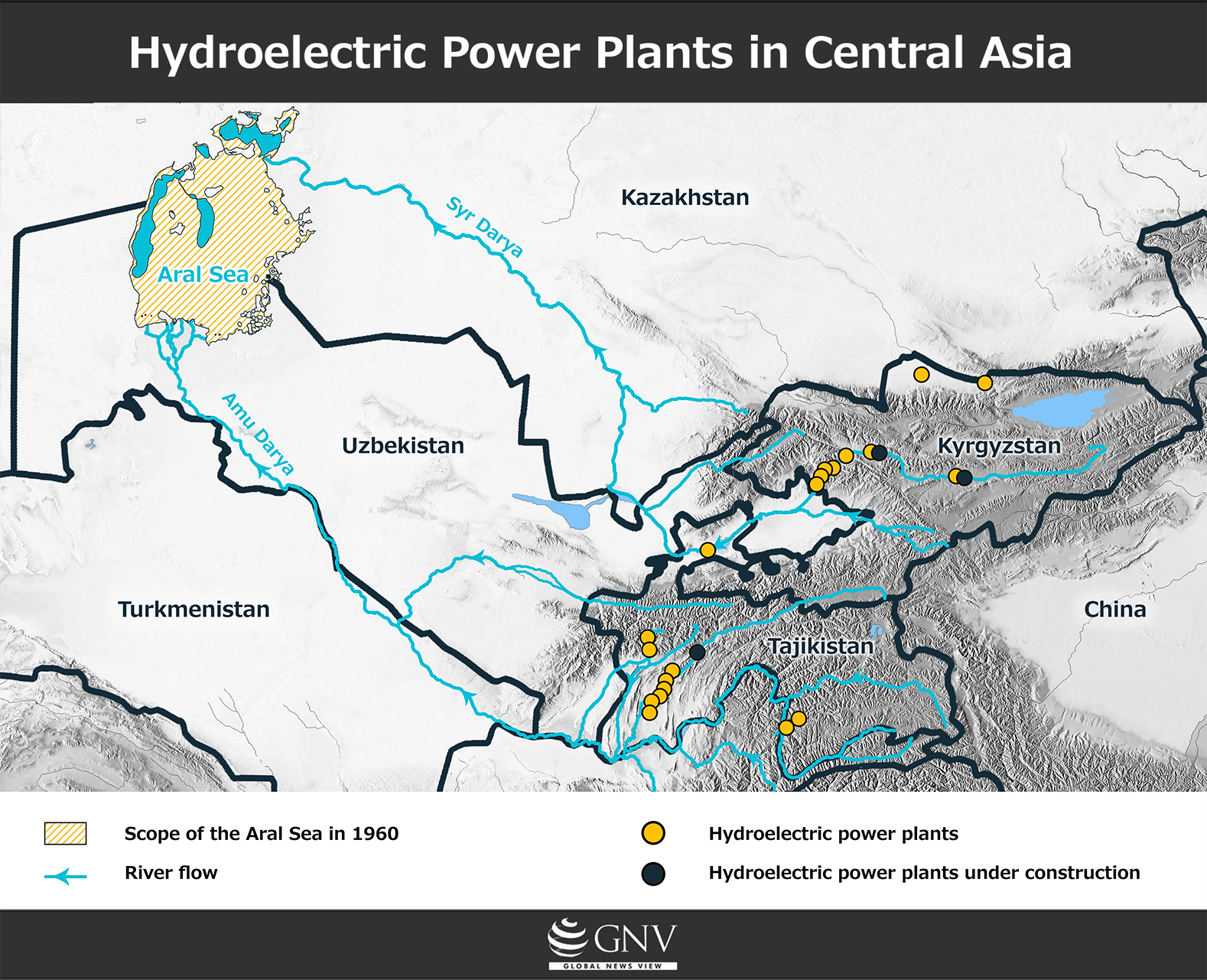 Map based on data from OpenStreetMap, Barqi Tojik, CIS Electric Power Council. Electric power of the Kyrgyz Republic, and The Aral Sea disaster.

This system worked to everyone’s advantage. However, independence from Soviet rule created a situation where self-interest has caused the old Soviet system of cooperation to collapse. Conversely, it gave rise to conflict over resources.

In the mid-1990s, Uzbekistan started charging market value for its energy. Kyrgyzstan and Tajikistan, however, could not afford these prices. As a result, during cold winters, when electricity is of prime importance, they continue to release water for hydroelectric power generation. For this purpose, Kyrgyzstan and Tajikistan accumulate water during the hot summer season – much to the dismay of Uzbekistan. It has crippled Uzbekistan’s ability to acquire sufficient water during the summer months for irrigation.

To alleviate this dilemma, Kyrgyzstan and Tajikistan are planning to construct more dams in the Vakhsh and Naryn rivers. Tajikistan’s Rogun Dam, with a planned height of 335 meters, will become the highest dam in the world. Kyrgyzstan’s Kambarata-1 Dam will have an approximate height of 275 meters. 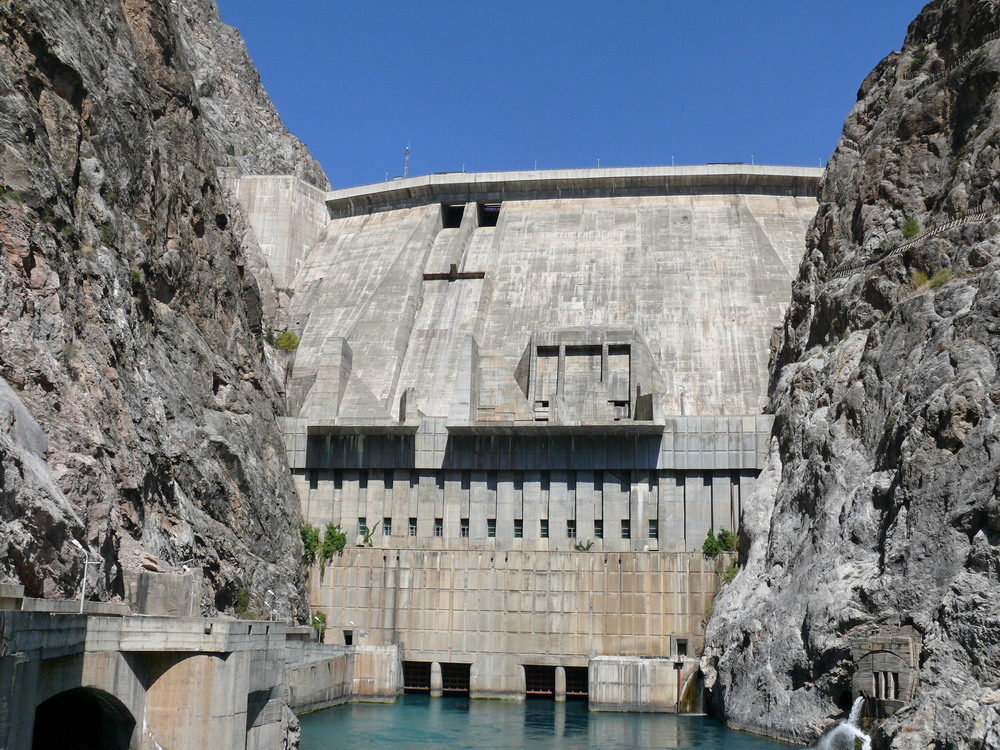 Uzbekistan is vehemently opposing these projects, as their consequences can leave the country without water for irrigation. In 2012, the former president of Uzbekistan, Islam Karimov, warned that Tajikistan and Kyrgyzstan’s efforts to build hydroelectric power stations upstream could spark war in the region.By his calculations, it can take up to 8 years to fill the new reservoirs with water, leaving Uzbekistan without water for a prolonged period of time.

Mistrust of each other, and the absence of cooperation, has worsened the water and energy crises in Central Asia. Tajikistan and Kyrgyzstan have intermittent interruptions of electricity during their cold winters. At the same time, Uzbekistan does not have enough water for irrigation during the summer.

Moreover, bad governance and resource management in these countries have exacerbated both crises. In Tajikistan, both the production and consumption of electricity have declined in part due to inadequate capital investment into the energy sector. Its obsolete energy infrastructure, leftover from the Soviet era, has not been properly maintained, and neither has it been replaced.Electric power companies cannot improve the infrastructure because of a lack of finances. The authorities of Kyrgyzstan and Tajikistan are keeping electricity tariffs artificially low, to avoid public discontent.

Additionally, corruption in these countries is rife, further exacerbating the energy crisis. For example, Tajikistan has been known to export electricity during the winter, even though it suffered blackouts. A similar situation is observable in Uzbekistan. Uzbekistan’s irrigation systems are also in desperate need of modernisation. Research suggests that 50 to 80 percent of water used for agricultural irrigation is lost. Only 25 to 35 percent of water that reaches crops is efficiently used. A former senior provincial official from rural Uzbekistan is quoted as saying:

[Farmers] are told they have to grow cotton, and the way they water the fields of cotton is very old-fashioned. They should use new modern methods to do it, but [the government] does not want to spend money. They could buy cotton-picking machines, but it is cheaper for them to use children and the people’s labour for cotton picking. Uzbekistan cries about the lack of water, but it is not true. It is an artificially created problem.

In conclusion, all three Central Asian countries have a shared responsibility in exacerbating the region’s water crisis. As a result, while the authorities are blaming each other for the crisis, their countries’ citizens suffer a lack of water and electricity.